We will show you products that fit your vehicle

Two M142 ECUs are supplied, one acting as a Master ECU, in which all common tuning adjustments are made, the other as a Slave ECU that takes commands from the Master, together providing full functionality plus Engine Torque Control and additional features unique to these vehicles.

Along with fuel, ignition, throttle and camshaft control, this Kit also supports other OE ECU features, including:

The Package contains the base calibration and all settings for the sensors, direct fuel injectors, port fuel injectors, ignition coils, knock control, throttle servos and camshafts. They have also been calibrated to match the OE factory fuelling, ignition and camshaft phasing. This saves a significant amount of time by shortcutting the setup process. Users can begin tuning to their desired power level right away with the assurance of a safe base tune that is equivalent to the original vehicle.

The Package is available for use with MoTeC's M142 ECUs.

This product includes CAN messaging for full OE vehicle integration. The Package caters for OE vehicle systems such as power steering, ABS, starting systems and dashboards.

NOTE: Newer models like the Huracan Evo will be added to the list once testing is complete. Contact MoTeC if your model is not on the list. This product is not suitable for Audi R8 2008-2015 (first generation) models. 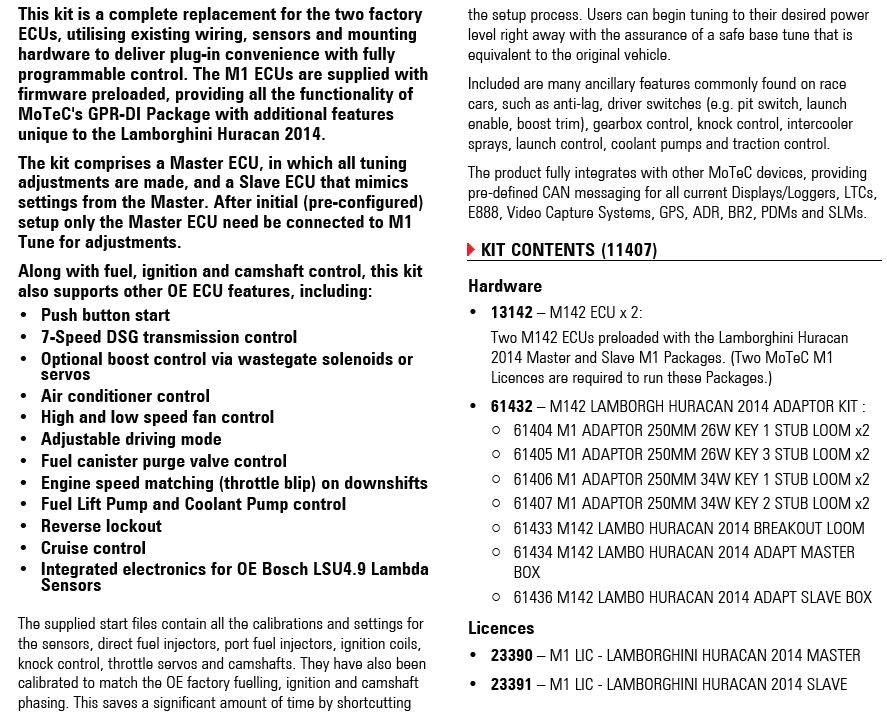